My awesome wife studies Japanese. Recently she showed me a challenge a friend of ours came up with. But first some basic (and over-simplistic) concepts:

(skip if you know anything about Japanese)

Can you think of Japanese words like 妊婦, 爆煙, or 価値 where the left radical is identical in both kanjis?

For example, with the radicals highlighted:

I hardly know any Japanese, but I wondered if I could write a program that can find such words…

I took the data from a Firefox add-on called Rikaichan.

Rikaichan contains information on words, so we’ll start with that:

I’ve download the Japanese-English Dictionary, which is a separate add-on, and found that Rikaichan has all word in a sqlite database. Using a System.Data.SQLite we quickly connect to it:

We can get the schema using select * from sqlite_master;, which reveals just a single table (and two indices):

We’ve got a list of 236,329 words, their kanji and kana representations, and their English meaning. This is nice, but there is still no data about the radicals…

Rikaichan does have that data: when standing over a kanji it shows a lot more information: 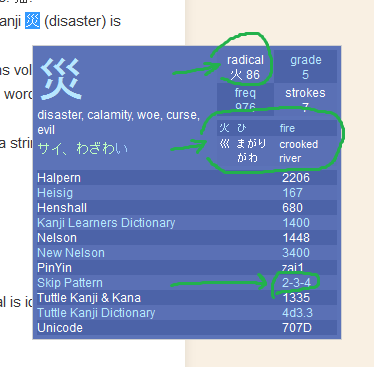 We have three things that are interesting here:

Poking a little deeper, we can see this data in the main add-on, not the English dictionary (which is unexcpected, because each kanji has its meaning in English).

There is a file called kanji.dat, with this structure:

So this is promising. For 災, B86 correlated with “radical 86” from the screenshot, and there’s the English meaning (but we don’t need that). There isn’t any information on the other radicals, and nothing about their positions…
One thing that did stuck out is P2-3-4. Looking at the image we can see this is called SKIP pattern – and it looks less opaque than the other kanji indices. A quick search demystifies it. The first digit can have only four options:

Great! Now it looks like we have enough data to find our words: We have a list of words, list of kanjis, “main” radical in each kanji, and the general structure of the kanji. It looks like the “main” radical is (mostly) the one on the left, and that’s good enough.

We can parse this file using a small regular expression:

Here’s a pie chart with the distribution of the different kanji structure. The majority of them is of the left-and-right kind, so we will probably find a lot of words: 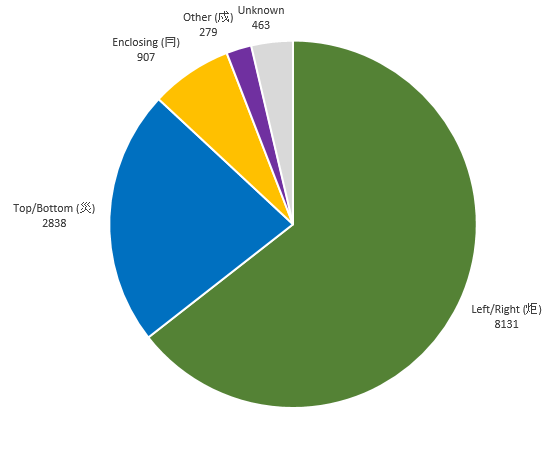 With 64% of kanjis in the 1 category, you have to wonder if SKIP pattern is a good way to organize kanjis.

What are the Radicals

We’ve extracted the “main” radical for each kanji, bu we are still missing something. Some kanjis are also radicals, and according to our data, they are their own radicals. For example:

Here is the source data from kanji.dat

This is bad news, because it would introduce false positives – what if there was a word like 順巛? (not a real word, by the way).

Luckily, the Rikaichan developers are really good at naming files, and we can find that data on radicals.dat:

As seen above in the regular expression, it is not trivial to split a string into Unicode characters. you can not assume one Char is one Unicode character. For example, "𠀋" is a surrogate pair, made of two Chars.

It is simple enough to split a string to Unicode character points:

We can finally write the query to find our words:

We’ve found 1364 such words. Naturally, some of them are quite nice:

You can see the whole code on GitHub: https://github.com/kobi/JapaneseWords